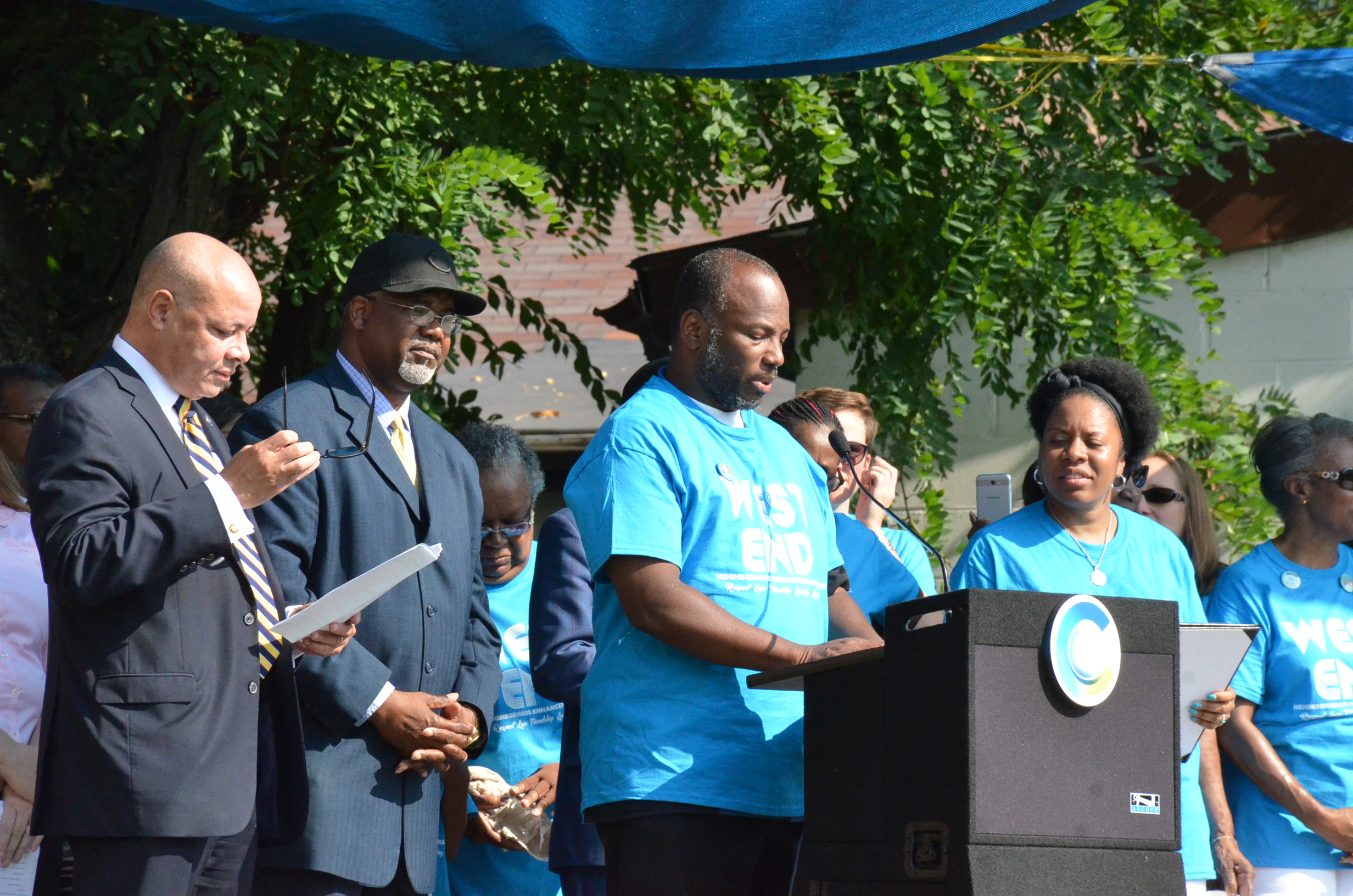 City leaders joined a crowd of West End residents and community partners Tuesday morning to kick off a series of initiatives to improve the quality of life in the West End. The celebration outside Bright Star Community Church on the corner of Findlay and Linn streets concluded with Mayor Cranley declaring the day as Seven Hills Neighborhood Houses Day in the West End, as this anchor institution celebrates its 55th anniversary.

“The NEP is an investment in one of our City’s greatest assets—our neighborhoods,” said Mayor John Cranley. “This program has been extremely successful in addressing crime and blight throughout the City. These efforts will accelerate community development momentum in these communities, creating an immediate, as well as lasting impact on this neighborhood. I would also like to thank our community partners who make this initiative possible time and time again.”

The City’s 24th Neighborhood Improvement Project (NEP) brings together residents, community and business organizations from mid-August through mid-November to take part in a variety of community improvement, crime reduction and beautification initiatives. This 90-day community blitz will focus on the northwest quadrant of the West End, in an area bounded by West Liberty Street, Central Parkway, Freeman, Winchell and Bank streets.

The primary goal is to work alongside local property owners and residents to bolster a sense of community pride and improve the quality of life for everyone who calls the West End home. “Without our community partners, improvements like these wouldn’t be able to happen in Cincinnati,” said City Manager Harry Black. “These types of public-private partnership efforts help to make our city a great place for our residents to call home.”

During the event, Messer Construction, which is building its new corporate headquarters in the West End, announced a partnership with the West End NEP. The partnership includes multiple projects and donations that will take place alongside Messer’s Women’s Empowerment Day on Oct. 6. The signature element of every NEP is a special project developed and supported by a group of community stakeholders. Project details will be released by way of a special announcement in the coming weeks.

“We are optimistic that the NEP activities will continue to build on the momentum to implement our ‘West End Speaks’ community plan,” said Keith Blake, president of the West End Community Council.

Communities selected to take part in the NEP are identified through an analysis of building code violations, vacant buildings, disorder and drug calls for police service and drug arrests, as well as incidences of graffiti, junk autos, litter and weeds.

The City works alongside the neighborhood community council as well as a stakeholder group consisting of residents and local businesses to help establish a course of action unique to the needs of a community.

Additional information about the award-winning Neighborhood Enhancement Program is available on the City of Cincinnati’s website.

A public message from the Cincinnati Health Department