Is Clinton-Era Trade Bill for Africa Next for the Trump Hachet? 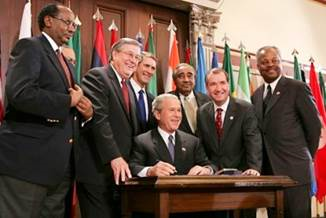 (TriceEdneyWire.com/GIN) – The Trump administration can’t seem to find an existing trade or aid bill for Africa that it likes enough to renew. The African Growth and Opportunity Act (AGOA)– eagerly signed and extended by Presidents Bill Clinton, George Bush and Barack Obama – is the latest economic development program in the crosshairs of the new U.S. doctrine of “America First.”

This month, the annual AGOA Forum, held in the coastal city of Lome, Togo, was attended by 40 African finance and trade ministers, the top U.S. trade negotiator, Robert E. Lighthizer, and a large delegation of senior U.S. government officials.

The Forum was titled “The US and Africa: Partnering for Prosperity through Trade” but the optimism was belied by the outcome – no decision on renewing the agreement that expires in eight years.

Under AGOA, some 6,500 items, including textiles, steel, chemicals and numerous agricultural products are approved for duty-free export to the U.S., enhancing market access to U.S. buyers.

It has been the cornerstone of the US government’s trade policy with sub-Saharan Africa since 2000.

Kenya, which exported products to the U.S. worth $394 million in 2016, was nearly stripped of AGOA status when it joined the East African Community (EAC) to ban imported second-hand clothes and shoes by 2019. Kenya finally agreed to accept the used garments, resolving a complaint by a U.S. trade group, but EAC members Rwanda, Tanzania and Uganda, who claim used American clothes will hurt their own growing textile industry, now face an “out-of-cycle” review.

The turnaround “is, no doubt, a victory for Kenya’s trade diplomacy,” said Abdirizak Musa, an embassy official. But just to ensure their “victory,” Kenya hired a Washington lobbying firm with ties to the Trump administration at the rate of $100,000 monthly for three months.

Meanwhile, other programs on the chopping block include the U.S. African Development Foundation, and funding for U.N. peacekeeping operations. Current pledges to treat HIV/AIDS in Africa— known as PEPFAR and which provides life-saving treatment for 11.5 million people – appear to be safe for now.

GLOBAL INFORMATION NETWORK creates and distributes news and feature articles on current affairs in Africa to media outlets, scholars, students and activists in the U.S. and Canada. Our goal is to introduce important new voices on topics relevant to Americans, to increase the perspectives available to readers in North America and to bring into their view information about global issues that are overlooked or under-reported by mainstream media.