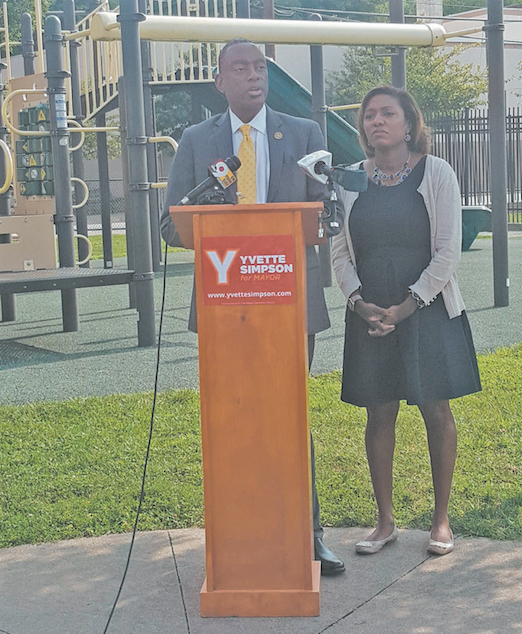 Former Mayor Mark Mallory has endorsed Cincinnati City Councilwoman Yvette Simpson in her candidacy for mayor in the November election.

“We are excited to announce that mayoral candidate Yvette Simpson has received the endorsement of former Mayor of Cincinnati Mark Mallory,’’ Simpson’s campaign stated in a statement released shortly after Simpson and Mallory held a press conference Tuesday morning at Hanna Park to announce the endorsement. “Mayor Mallory believes Yvette has a true understanding of what it takes to be a progressive visionary leader.’’

Mallory said, “A lot of work that was done in the past six years would not have been possible without the intervention, assistance, intelligence, and vision of Yvette Simpson. She has worked tirelessly since being elected to City Council to improve the lives of the citizens of Cincinnati, working with the youth in the effort to help them find employment, and she has worked on big projects all around the city, and worked in neighborhoods.”

Mallory was the first two-term Mayor under the City’s stronger-mayor system, the first directly elected African-American mayor, and the first mayor in more than 70 years who did not come from City Council.  He has championed the renaissance that is taking place throughout Cincinnati. In 1994, he succeeded his father Majority Floor Leader William L. Mallory, Sr. in the Ohio House of Representatives. Four years later, he was elected to the Ohio Senate where he rose to the position of assistant minority leader.

“Yvette Simpson will be able to bring her own style of leadership,” Mallory said. “I am confident that because of Yvette Simpson’s vision, commitment, passion, and toughness that she has what it takes to lead the City of Cincinnati to a better future.”