Cincinnati tennis legends Rachel Fair and Anthony Pack are shown in August 2016 when they were inducted into the Cincinnati Tennis Hall of Fame during the opening ceremonies of the Western & Southern Open at Lindner Tennis Center in Mason, Ohio. Herald photo

Rachel Fair and Anthony Pack, the founders of the Inner City Tennis Project in Cincinnati, were recognized as “Living Legends” at the 94th Annual MID-TAC Tennis Tournament held recently in Indianapolis, Indiana.

They were honored for consistently participating in MID-TAC for over 30 of the past 94 years, and either winning in their division on a consistent basis or supporting MID-TAC by volunteering or serving in any capacity that has strengthened MID-TAC’s existence as the Midwest Section of the American Tennis Association. 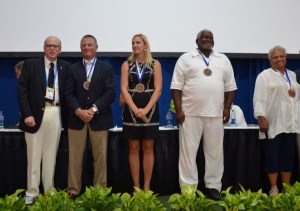 The Inner City Tennis Project (ICTP), founded in 1986, and MID-TAC both use tennis as a vehicle to cultivate strong family values. The organizers believe that athletic competition and good sportsmanship are prerequisites for building good personalities and character. With an emphasis on increasing participation of inner city youth, the Inner City Tennis Program offers a program that provides year-round quality instruction along with a nurturing social environment, which assists children in achieving their personal goals both in the sport of tennis and life.

Most participants come from Cincinnati’s disadvantaged inner-city neighborhoods, but the program’s reputation of excellence is attracting children from all neighborhoods.

Four years ago, the ICTP began a collaboration with Su Casa, and children from Su Casa are now enrolled in the tennis instructional program.

Participants are encouraged to achieve excellence in school, honor their family commitments, and find ways to serve their communities. Over 90 ICTP graduates have received both academic and athletic scholarships, attending Howard, Columbia, Carnegie Mellon, Duke, Ohio State, Xavier, Northern Kentucky, and Florida A&M Universities, among others.

Alumnae have gone on to careers in tennis: Justin Stuckey as Wittenberg University’s men’s and women’s tennis coach; Isaac Yarrel as Director of Tennis at the Concourse Athletic Club in Dunwoody, Georgia; Brandon Smith as the USTA Midwest Section’s Chicago Tennis Service Representative and Midwest Diversity Specialist; and Greg Pipkins as an instructor and coach at Midtown Tennis Club in Chicago, Illinois.

This year, 17 ICTP students participated in the MID-TAC tournament. Winners were:

Cincinnati was well represented at the MID-TAC Tournament. Moreover, Rachael Fair remarked that attending the event and seeing other African American children competing in a tennis tournament was a very emotional and empowering experience for the participants.

Just over a year ago, Rachel Fair and Tony Pack were inducted into the Cincinnati Tennis Hall of Fame at the Western & Southern Open at the Lindner Tennis Center in Mason, Ohio. They, along with two other inductees – two-time All-American Audra Falk Billmeyer, and former ATP player Doug Corn – joined an elite list of 58 individuals who have helped shape Cincinnati tennis. 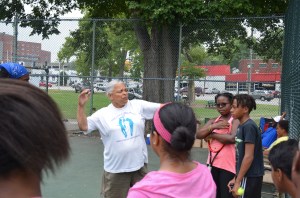 Fair began playing tennis at age 14 in Cleveland. She entered and won the 16 & Under Plain Dealer City Tournament when she was 15. The Forest City Tennis Club gave her opportunities to play tennis and compete with other America Tennis Associate (ATA) clubs and players. In 1957, Rachel met a young Arthur Ashe and could watch her hero, Althea Gibson play at an exhibition at the ATA Nationals at Central State University. In Cincinnati, Rachel began her career with the Cincinnati Recreation Commission (CRC), supervising many programs including the National Junior Tennis League. At the CRC, she helped found the Inner City Tennis Project, which aims to provide an affordable tennis experience to children in Greater Cincinnati, with an emphasis on increasing participation of inner city youth. She says her lifetime work with children a never-ending reward.

Pack, a Cincinnati native, graduated from Woodward High School and the University of Cincinnati. In 1991, he was the Colonial Racquet Club Men’s 3.5 division champion. From 1991 to 2005, he was a USTA Certified Tennis Official and is currently a USPTR Certified Tennis Professional. He previously worked for the Cincinnati Recreation Commission (CRC) and retired after 34 years of service. His passion for bringing the game of tennis to all, and introducing tennis to his daughter Casey, led to his founding the Inner City Tennis Project with Fair. Pack serves on the Greater Cincinnati Tennis Association Board of Directors and the Midwest Tennis Association Board of Directors. Pack said his major tennis influences have been Althea Gibson, Dexter Adams, and William Beck.

Cincinnati is home to world-renowned players, the oldest professional tournament played in its original city, and the first city ever selected by the International Tennis Hall of Fame as its “City of the Year.”

The 58-members Cincinnati Tennis Hall of Fame began with the induction of Bill Talbert and Tony Trabert in 2002.