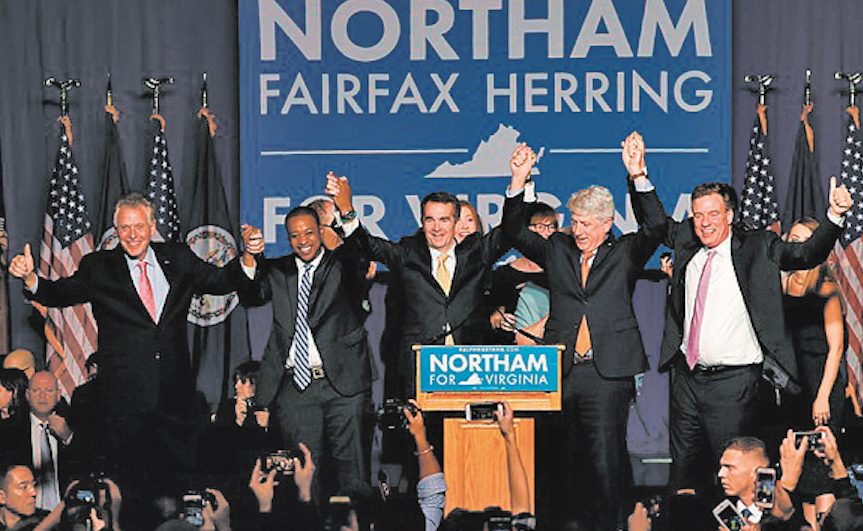 In a result seen as a wholesale rejection of a president many see as unfit, and a message to the political party that has backed him, fired up Virginia voters ensured Democrats retained control of the top tiers of state government and replaced at least a dozen seasoned Republican lawmakers in the General Assembly to boot.

Dr. Northam won the keys to the Governor’s Mansion after decisively defeating Republican nominee Ed Gillespie by a vote of 1.46 million votes, or 53 percent, to about 1.17 million votes for Mr. Gillespie.

And Herring, who won by only a handful of votes four years ago, also had no problem defeating Republican challenger John Adams by a wide margin.

The victory was even sweeter as Democrats surprisingly won 15 more seats in the House of Delegates to claim a total of 49 seats, moving them closer to retaking control of the 100-member chamber from Republicans who have used their majority to block expansion of health care.

Turnout was the key to the Democratic sweep. Unofficial results indicate about 500,000 more people turned out to vote in this year’s statewide contest. Overall, about 47 percent of the state’s 5.4 million voters turned out, up from 42.7 percent four years ago.

University of Richmond law professor Jonathan K. Stubbs said the election showed that “Democrats were more energized than some appeared to think in the waning moments of the campaign.”

While Trump foes turned out in large number, Stubbs said the legions in Virginia who backed President Trump in the November 2016 presidential race failed to show the same enthusiasm for Gillespie.

Stubbs and others credited President Trump and the hostility he has created with generating the extra Democratic enthusiasm, although the results followed Virginia tradition in which the party that holds the White House loses the governorship. Gov. McAuliffe, who won in 2013 when President Obama was re-elected, was the only person in the last 10 elections to buck that tradition.

“This was really an extraordinary rebuke of Donald Trump and all he stands for,” Farnsworth said.

President Trump is highly unpopular in the state, he said, with polls showing the president’s approval rating in Virginia hovering around 34 percent.

In Farnsworth’s view, the Gillespie campaign’s decision to go all in “on a Trump-style advertising campaign really hurt him. He campaigned, at least in his ads, like Donald Trump and was punished for it.”

Exit polls in Virginia showed that one-third of the voters went to the polls to oppose President Trump, and only 17 percent went to support him.

Post-vote surveys also indicate that health care was the most important single issue to voters, which benefited Northam. During the campaign, Northam touted his medical service in the military, his medical practice and his volunteer service as medical director of a children’s hospice in Portsmouth.

The surveys also found that Democrats won with a diverse coalition of African-Americans, young people, women, Latinos and Asian-Americans from cities and suburbs, while Gillespie was most popular among white males.

The Democratic trio won big in Richmond, but also did surprisingly well in usually Republican-friendly Chesterfield County, which Gillespie only won by a few hundred votes.

The Democrat trounced Mr. Gillespie by up to 22 percentage points in some localities, or bigger margins than Democrat Hillary Clinton ran up last year in winning the state during the presidential contest against President Trump.

And once Republican Henrico County also provided a large margin for the Democrats.

Calling it the largest margin of victory for a Democratic gubernatorial candidate since Gerald Baliles’ victory in 1985, Northam promised to be a governor “for all the people,” even those who opposed him.

Dr. Northam also used his victory address Tuesday in Northern Virginia to call for an end to the bigotry, intolerance and nastiness that was the hallmark of candidate Trump and that has remained a characteristic of President Trump’s messages since taking office.

“Today, Virginians have spoken,” Northam said in rejecting that style of politics. “Virginia has told us to end the divisiveness, that we will not condone hatred and bigotry, and to end the politics that has torn this country apart,” he said.

“’It’s going to take a doctor to heal our differences,” he continued, “to bring unity to our people, and I’m here to let you know that the doctor is in. This doctor will be on call for the next four years. We need to close the wounds that divide and bring unity to Virginia.”

Fairfax called the resounding victory an opportunity to “rise to the better angels of our nature, to take our country on a different, more positive course, to turn back from the political darkness that we are seeing out of Washington, this White House, and it is incredibly fitting that Virginia leads the way.”

He continued, “I look forward to fighting for progress and making sure that everyone, no matter where they’re from, who they love, the color of their skin, what God they pray to or whatever ZIP code they’re in gets a shot at the American Dream and a chance to rise.”

For most of the public, the election brought a thankful end to the barrage of attack ads that took over TV screens during the campaign.

The National Rifle Association, which became notorious for its attack ads on behalf of Republicans, was perhaps, after President Trump and the Republican Party, the biggest loser.

Voters rejected the group’s fear-mongering ads that called for the election of the Republican candidates to prevent the confiscation of guns.

President Trump, who endorsed Gillespie but did not campaign with him, quickly disavowed the former chairman of the Republican National Committee shortly after Dr. Northam was determined to be the victor.

“Ed Gillespie worked hard but did not embrace me or what I stand for,” President Trump tweeted, a theme quickly picked up by conservative talk show hosts who back the president.

“With the economy doing record numbers, we will continue to win, even bigger than before!”

Democrats worried that if Gillespie won, Republicans would see it as a green light to emphasize divisive cultural issues in their campaigns for next year’s elections, when all 435 seats in the U.S. House of Representatives and 33 of the U.S. Senate’s 100 seats come up for election. Republicans now control both chambers.

Now it is Republicans who must worry that siding with President Trump, as Gillespie did, could be a losing proposition.