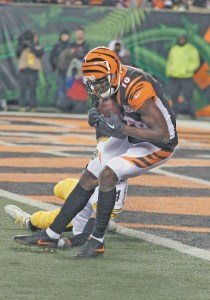 Bengals’ wide receiver A.J. Green gets a first down with this catch when things were going good for Cincinnati in the first half against the Pittsburgh Steelers at Paul Brown Stadium in the primetime Monday Night Football match. Then it was all down hill as the Bengals lost the game in the second half. Photo by Michael Mitchell.

Last night’s Bengals game may be the last game remembered for Marvin Lewis’ employment and the ’17 Bengals. It was another heart breaker, lose sleep over, dagger in heart, left speechless type of game. Another knock-down-drag-out must win against the Steelers. Same result as most others. The Bengals finish with less points than the opponent.

It may have been better for fans and the organization had the team lost 50-0. With a score like that, at least you know you were never competitive nor had a chance. This one hurts real, real bad. It’s kind of like having a winning million-dollar, mega-million ticket and leaving the million-dollar ticket in your pants. Only, the pants are washed and have the bar code unreadable. All that money that should have and could have been yours is gone. Poorhouse, I’m not leavin’ ya.

The Bengals had a 17-0 lead on the Pittsburgh Steelers and were firmly in control of the game. Joe Mixon was able to run the way everyone thought he could when he was drafted. Andy Dalton was actually attacking and winning passing battles on the Steeler secondary. The Bengal offensive line actually kept Dalton upright most of the game. Things were going well. You knew the law of averages would catch up. And they did in the worst way.

When that fourth quarter came you knew like an Alfred Hitchcock movie something was going to turn the tide. It did. The hated Steelers showed why they are so good. Backs against the wall, Steeler quarterback Ben Roethlisberger Sr. completed passes left and right against the Bengal D. The killer Bs of Ben, Brown, Bell, and Bosewell took the 17-0 deficit they faced against the Bengals and tied it at 20.

When crunch time came the Bengals picked the worst possible time to remember they were the Bengals. All the things that got them the lead all were gone, and replaced by line flaws, defensive breakdowns, and the inability to convert on crucial third down plays to Pittsburgh’s favor.

Boswell of the Steelers kicks a 38-yard field goal to not only end the game with a 23-20 Steeler victory, but also the Bengals’ playoff hopes, and possibly Marvin Lewis’ employment. If the scoreboard wasn’t enough, the Bengals set a franchise record with the most penalized yards they’ve ever had in one game.

Cincinnati has four games left. Although mathematically they are still alive, realistically Cincy has to turn to the waitl’ next year mode.

Sure there will be fans that will show up at PBS to watch the Bengals play the Lions and the Bears, but, honestly, the air out of the stomach is gone.

You’ve heard when a player says, ‘I left it all on the field,’’ Well, the fans feel most have left it all in the stands, and it wasn’t good enough.

Time to switch focus to the 2018 draft and find out which college stud can help the team or be the next bust.