Special to the Trice Edney News Wire from NorthStarNewsToday.com 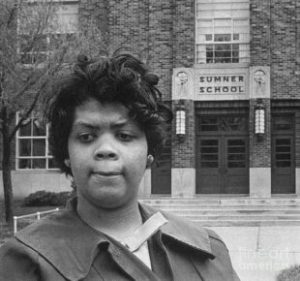 (TriceEdneyWire.com) – Linda Brown, the named plaintiff in the 1954 landmark civil rights case “Brown v. Board of Education of Topeka”  in which the U.S. Supreme Court ordered the nation’s public schools to desegregate, has died.

Ms. Brown died Sunday, March 25, in Topeka, Kansas, where she was born on February 20, 1942.  She was 76 and had lived in Topeka most of her life. Tyson Williams, a spokesman for Peaceful Rest Funeral Chapel, confirmed her death.

She became part of American history on May 17, 1954, when a unanimous Supreme Court overturned Plessy v. Ferguson, the court’s 1896 decision that declared separate but equal facilities were constitutional.

In its 1954 ruling, the Supreme Court ruled that segregated schools were inherently unequal and ordered the desegregation of the public schools with “all deliberate speed.”

In 1950, the NAACP Legal Defense and Educational Fund Inc. asked a group of black parents if they would attempt to enroll their children in all-white schools knowing they would be denied admission because of school segregation.

Brown, who was in third-grade, lived in an ethnically diverse neighborhood but like the area’s other black children, Brown had to walk four miles to a school that was segregated for black children although Sumner Elementary, an all-white school, was only four blocks away.

Her mother and father were Leola and Oliver Brown. They were parents of three girls. Brown said her father, a pastor, questioned why his daughter had to walk so far to attend school.

“My father pondered, ‘Why? Why should my child walk four miles when there is a school only four blocks away,” she recalled.

The NAACP Legal Defense and Educational Fund Inc. wanted to file a lawsuit on behalf of 13 families nationwide, challenging De Jure school segregation, which is based on laws or actions of the state. It is unlike De facto segregation which happens by fact rather than by legal requirement.

Thurgood Marshall, who in 1967 would become the first African-American Associate Justice on the U.S. Supreme Court, was one of two lead attorneys and strategists. The other was Charles Hamilton Houston, former dean of Howard University Law School.

In 1952, the NAACP filed a lawsuit consolidating five cases.

Linda Brown’s name was alphabetically at the top of the list of plaintiffs, making her the named plaintiff in the consolidated case.

When the U.S. Supreme Court issued its decision, Linda Brown was in junior high school and at a grade level that had been integrated before the 1954 decision.

In the late 1970s, Brown worked with the ACLU. She argued the district’s schools were still segregated. The Court of Appeals ordered three new schools constructed.

Although she was a civil rights activist, speaker and education consultant, Brown complained that the media treated her as a lofty historical figure, not a human being.

After the Supreme Court ruling, the family moved in 1959 to Springfield, Missouri. Two years later, her father died. Remaining members of the family returned to Topeka.

Linda Brown was married three times. She was divorced and later widowed. She married William Thompson in the mid-1990s.

Sherrilyn Ifill, president and Director-Counsel at the NAACP Legal Defense Fund, said “Linda Brown is one of that special band of heroic young people who, along with her family, courageously fought to end the ultimate symbol of white supremacy-racial segregation in the public schools.”

Kansas Governor Jeff Colyer tweeted: “Linda Brown’s life reminds us that sometimes the most unlikely people can have an incredible impact and that by serving our community we can truly change the world.”