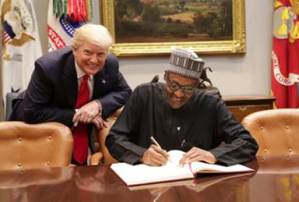 Chiding his counterpart on the proliferation of violence throughout that country, Trump said: “We are deeply concerned by the religious violence in Nigeria including the burning of churches and killing of Christians.”

President Buhari responded that efforts were being made to ensure a reduction in the killings in the country, which he blamed on militia trained by the late former Libyan President, Muammar Gadaffi.

Agreements appear to have been made during a closed-door session for the purchase or gifting of aircraft and other weapons to aid Nigeria’s war on Boko Haram.

“We are also helping our Nigerian partners by facilitating intelligence, co-operation and providing training and military equipment to Nigerian forces,” the president disclosed. “For example, we recently sold Nigeria 12 US A29 Super Tucano war planes. This is the first ever sale of the American military weapon to Nigeria. This new aircraft will help Nigeria to target terrorists and protect civilians.”

The sale of the planes, long sought by the Nigerians, had been held up by the Obama administration over human rights abuses by Nigeria’s military.

Trump turned to  the scourge of human trafficking which he claimed was greater than any time in history.

“To protect Americans from these menaces,” he continued, “I have called on the Congress to close deadly immigration loopholes that are exploited by terrorists, traffickers, and criminals. Just look at our borders that are weak and obsolete laws. They are obsolete, weak and pathetic and there is no country that has laws as we do.”

Mr. Buhari, for his part, congratulated Mr. Trump for the “impressive” performance of the American economy, and credited him for playing a “statesmanly role” with North Korea that has led to discussions on denuclearizing the Korean Peninsula.

Not everyone gave the encounter such over-the-top praise. The Muslim Students’ Society of Nigeria faulted the U.S. leader’s comments which, they said, signaled his hatred for Muslims and Islam in Nigeria.

“One would wonder if Trump is not aware or deliberately ignored the murder of several Muslims in a mosque at the University of Maiduguri, or those killed in mosques in Yobe and Zamfara; and many other parts of the country.

Trump’s offer of assistance at this point in time is “divisive, ‘unafrican’ and insincere.”

Saheed Ashafa, president of the student group, urged world leaders to ignore insinuations that Muslims are not against terrorism, adding that it would be more beneficial to tackle insurgency with utmost neutrality.

“Let me reiterate that as Muslims we condemn and reject all forms of terrorism, insurgency and oppression in whatever name being perpetrated.

“We should also remember that in Nigeria, most families are composed of Christians and Muslims alike, just as we also have other faithful.

“Trump’s call for separatism when the world is advocating for collectivism is not a healthy offer.”