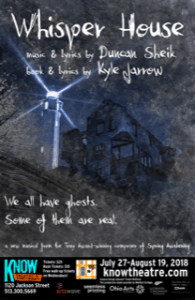 We all have ghosts. Some of them are real.

Along the rocky coast of Maine, in the shadow of World War II, a young boy is sent to live among strangers…and ghosts.

​With music & lyrics by Duncan Sheik, the Tony-winning composer of Spring Awakening, this daring new pop rock musical unfolds in 1942, in and around a remote lighthouse on the coast of Maine.

Amid the threat of U-Boats patrolling the shoreline and the nation’s rising suspicion toward foreigners, a young boy named Christopher is sent to live with an aunt he’s never met, after his father is shot down over the Pacific.

His aunt Lily is a reclusive lighthouse-keeper, unaccustomed to the company of children and harboring more than a few secrets in her isolated home.

Surrounded by strangers on a forbidding rocky shore, Christopher becomes entangled in a web of intrigue between the hard-nosed and patriotic Sheriff Charles; Lily’s Japanese handyman, Yasuhiro; and a pair of singing ghosts who may or may not be entirely real.

Whisper House became the perfect way to start our 21st season, entitled “Fear Itself.” Each story this season explores a fresh aspect of what we fear and why, and how we overcome those fears – or what happens when we don’t. Duncan Sheik and Kyle Jarrow’s show kicks things off by taking a lyrical look at our fear of the “other”: what fuels it, and how we confront it.

Join us as we dive into the mystery and music of Whisper House, only at Cincinnati’s Theatrical Playground.

FREE walk-up tickets are available on Wednesdays, as part of Know’s Welcome
Experiment. Reservations to Welcome Experiment performances are $5.00.

Know Theatre is Cincinnati’s Theatrical Playground. The Know showcases unexpected voices, new works, and plays that embrace the inherent theatricality of the live experience. Know Theatre seeks to be a place where artists and audiences feel welcome to take artistic risks, creating work that is cutting edge and accessible.