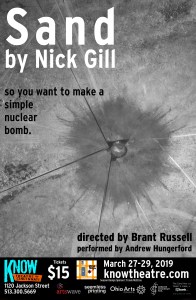 “so you want to build a simple nuclear bomb”

Join us at Your Theatrical Playground, Know Theatre, for a rare chance to see our Producing Artistic Andrew J. Hungerford onstage in the solo performance of an unforgettable new play, in its US premiere.

At 8.15 in the morning, everything is quiet.

The house is still.

Thirty one thousand and sixty feet above her, there is a single aircraft.

In forty three seconds, the bomb it has released will have fallen around twenty nine thousand feet and will detonate above the city.

In forty four seconds, seventy thousand people will be dead.

and the world turns.

At Know Theatre for a special limited run, March 28 – 30, Sand is a riveting new work of theatre that combines fiction, science, and history to explore the threat of nuclear weapons and the devastation of nuclear war. It’s a fractured collection of narratives that jump across the stories of a dozen women over a century-long timeline, building to an inevitable breaking point.

Sand is an intense, poetic dive into the frightening power that humanity wields against itself.

As a small but nimble professional Theatre, Know Theatre is uniquely suited to take a show from page-to-stage both rapidly and effectively – especially when a story is as relevant to this moment as Nick Gill’s Sand is.

Join us for a gripping night of hot-off-the-presses theatre, in a special limited run from March 28 – 30 – only at Your Theatrical Playground, Know Theatre of Cincinnati.

In shock to many, actor Chadwick Boseman, 43, dies