About 4 in 10 African Americans would say their heath is excellent or very good, according to the 2017 results from the Community Health Status Survey reported by Interact For Health. Yet this rate is lower than White adults and hasn’t changed since 2005. 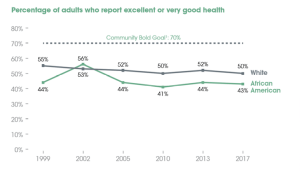 The Community Health Status Survey asked, “In general, would you say your health is excellent, very good, good, fair or poor?” Graph by Interact for Health

Drawing from a random sample 4,929 total adults in the Greater Cincinnati and Northern Kentucky area, the report provides a snapshot of the region’s health status for research, education and policy reform.

While just 2 in 10 African Americans rate the region highly as a healthy place to live – a number significantly less than White adults – reports of chronic conditions, community safety, and nutrition add further insight into the progress and shortcomings of health in the African American community.

The physical and social environment is an important determinant of health, just like individual choices. A neighborhood that feels safe encourages residents to engage in healthy outdoor activities. African American adults are more likely than White adults to agree they have safe sidewalks and shoulders, and 6 in 10 African American adults report high levels of physical activity, the same as White adults. While these statistics reflect positive commonalities among subgroups, the issue of food access stands in stark contrast.

Despite racial disparities in food security, there is no significant difference between the percentage of White adults and African American, who actually eat the recommended daily amount of fruits and vegetables. Just 1 and 4 people reported eating at least two servings of fruit and three servings of vegetables per day.

Meanwhile, a greater percentage (50%) of African American adults than White adults drink seven or more sugary beverages, like soda, tea, fruit and sport drinks, a week. The 2015-2020 Dietary Guidelines for Americans recommend limiting added sugars to 10% of daily calories, but one serving of these drinks often far surpasses this guideline.

Twenty years ago, 44% of African American adults were obese or overweight. Now, 7 in 10 are, according to the report. Maintaining a healthy weight has been an issue for all races across the U.S for decades. Though obesity and overweight rates have declined since 2013, 4 in 10 African American adults are obese, significantly more than White adults. 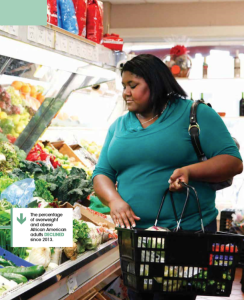 Nearly 4 in 10 African American adults have been told they have hypertension or high blood pressure, compared to 3 in 10 White adults. African Americans also have higher rates of severe allergies (22%) and diabetes (17%). Still, there is no significant racial differences between the rates of high cholesterol, which has increased to nearly 3 in 10 since 2013, stroke, chronic lung disease, cancer, depression or stress.

Just like the rest of the nation, the number of uninsured African Americans continues to decline steeply to mirror White people, with fewer than 1 in 10 Africa American adults without healthcare because of the cost. However, approximately 66% of African Americans have a usual and appropriate source for care, down from 2013 and far from the community goal of 95%. 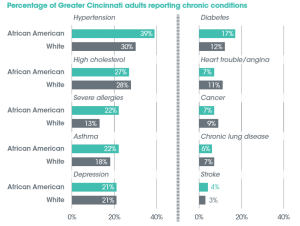 Smoking rates for both White and African American adults continue to steadily decline, with 1 in 4 being current smokers. Yet African American adults are more likely to allow smoking in their home, which contributes to secondhand smoke or environmental tobacco smoke (ETS). ETS is responsible for 41,000 deaths among nonsmokers a year and 400 deaths in infants.