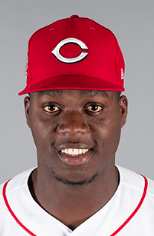 Over the past week or so people have seen a tall, thin player with the number 44 on his back. They have seen him doing phenomenal things. The last time that happened, it turned out to be a super star that played in 1980s and 90s. Eric Davis wore that number and did those same unbelievable things.

Here in August of 2019 it’s not Eric Davis. He is newcomer Aristides Aquino. What type of career will Aquino have? Beats me. It’s far too soon to tell.

I do know this. He is new and he is already involved in records few other players in Major League history have been involved in.

Aquino was called up to the majors on August 1, after now former Red Yasiel Puig’s short, but sweet, time was up in Cincy. The Reds desperately needed someone to fill the void and hit in Puig’s spot.

Not even two weeks later here are some of the things that Aquino has done. He became the 29th player in Reds’ history to hit three home runs in a game. He became the second player in modern major league history with a three-homer game within his first 10 career games. Aquino became the first major league rookie and first Reds’ player to homer in three consecutive innings. He became the second Reds rookie to homer in four consecutive games. (Ironically, Eric Davis was the other). Aquino homered in four consecutive plate appearances. Since his promotion to the majors, Aquino has lead the Major Leagues in slugging percentage, tied for homers, and is among the National League leaders in batting average.

Aquino hails from the Dominican Republic. He already has a new nickname in ‘the Punisher.’ While Reds pitching has been amongst the leagues best, Reds hitting has had something totally lacking. Aquino is the perfect tonic to boost a team that has been so close to getting over the hump, but just can’t. Cincinnati went into huge weekend, four-game series with division leading Chicago Cubs seven games back. The good new is the Reds didn’t lose any ground. The bad news is they didn’t gain any either. Aquino nearly single handedly won several of the games with his bat by himself. Chicago pitchers had no answers for the Reds’ new phenom.

Aquino fire didn’t just start when he got to the majors. It only intensified. For the Louisville Bats from 5-23 thru 6-19, The Punisher hit .345 during a 22-game hitting streak. He was an International League All Star at Louisville as he hit .299 with 28 home runs with 53 RBI’s in 78 games. Cincinnati has a month and a half to state its case as to why they should be in the playoffs.

Many were sad to see Pig go. For the Reds to bring up Aristides Aquino to the majors, it may turn out not to be just the move of the year, but the move that could possibly make the Reds top contenders in the near future.