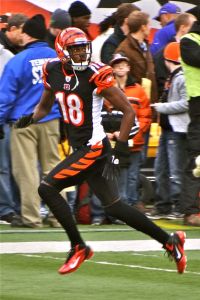 A.J. Green has had perfect timing, since coming to the Bengals.  Chad “Ocho Cinco“ Johnson dominated from 2001 to 2010. Ironically, the year after he left a new ‘beast’ came on to the scene. A.J Green entered the NFL with quarterback Andy Dalton.  During his first five seasons, Green didn’t know what it felt like to be on a losing team. Every season from 2011 to 2015, his team was in the playoffs. He was a large part of those teams.

As it stands right now, Green has amassed 8,907 receiving yards on 602 catches.  He has an incredible 63 touchdowns. The Georgia product is teetering on the doorstep of the Hall of Fame.

It has not been pretty for Green the last three seasons. He has missed multiple games, with his production being limited.  The Bengal All Pro was cursed in 2019. In his very first practice in training camp, Green suffered a foot injury that has, at least, cost him half the Bengal season. At most it may have finished his Bengals career. When the injury first happened speculation was the injury would keep him out a month. That month went to two to four games. Two to four games became six  games. Six games became half a season.

The latest speculation in that Green may be back after the Bengal bye week. And, then again, he may not.

Though his name has been rumored as trade bait for the Bengals, nothing has happened at the time of this story. Green can walk at the end of the season. He does not have a contract beyond 2019 with Cincinnati.

The term once bitten twice shy has got to be playing in the mind of Bengals’ owner Mike Brown. Offensive tackle Andrew Whitworth was still productive as a Bengal. He was long in the tooth. After making Whitworth what he thought was a laughable offer, the Bengal pro bowl lineman headed west to Los Angeles. Whitworth’s career has skyrocketed as he has gone to the Super Bowl, while being in the spotlight.

Brown has to be thinking the same of Green. If he trades Green away, the Bengal All Pro could get healthy, go elsewhere, and revive his thriving career. Should Brown roll the dice and keep Green without a contract, they could easily be outbid at the end of the season.

Cincinnati is going absolutely nowhere in 2019. The team is 0-8 after their latest loss to the Los Angeles Rams in London Sunday, and stare the Baltimore Ravens right in the face upon return.  It could turn out to be the worst team in Bengals history.

As for Green, Cincinnati is a much better team with the wideout then without him.

The Bengals, based on their history of aggressive hardball with contracts, look like they are prepared to move on without #18 after the season. Who knows. I could be wrong. Stranger things have happened.

Cincinnati is more than an A.J Green away from being a contender again. Trust me. But retaining a player of Green’s caliber would be a start for the near future.

Rolling the dice has not worked for Cincy. Open the checkbook and pay the man before it’s too late.