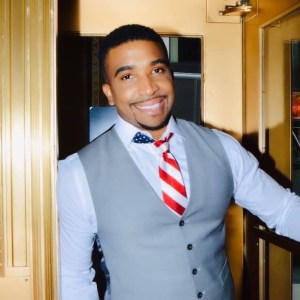 Houston, who anchors “Good Morning Tri-State” at WCPO, said he has fallen in love with Cincinnati and its people during the four years he has been here, but could not pass up the opportunity in Pittsburgh.

Houston came on board at WCPO in January 2017, and anchored the 4 p.m. show, “The Now Cincinnati” for about a year, then helped to anchor the morning show and anchoring the noon show.

The Pine Bluff, Arkansas native, said, “Cincinnati is the biggest city I’ve ever lived in. It has been exciting to explore and experience what this city has to offer.’’ He said he has enjoyed the various neighborhoods and the sports and cultural venues here.

“I did not know much about Ohio except it was important in picking the president,’’ he said, “Now, I am going to miss running into viewers at the Hyde Park Kroger, La Fitness and seeing viewers at Crossroads Church and New Prospect Baptist Church. I will also miss the volunteer opportunities I’ve had with several agencies and churches here, especially with the Boys & Girls Club. It’s not goodbye, for I hope to see the people I’ve met here later.’’

Houston said his most memorable story he covered here was the Cameo Night Club shootings that occurred in his first year at the station. “That changed me in a way I cannot put into words. Seeing the chaos, the blood, shoes and clothing on the ground, and the people running had an effect on me.”

The active shooter at Fifth Third Bank headquarters at Fountain Square also comes to mind, he said. “What blew my mind in that shooting was the manner in which the community came together at the square after it. Fountain Square truly is the place where Cincinnati comes together (in the best and worst of times,’’ he said.

Houston’s mother is a missionary in the church and his stepfather is a pastor. In the family tradition, he said he got into the news business to help people and to be a voice for the voiceless. “I wanted to do as much good as possible. I wanted to be in a position where I can help people who have problems. Our viewers call in about potholes, a check delay, you name it. Using the influence of WCPO, we were able to help a veteran get the medical care he needed, a woman who overpaid when she bought a car and was given the runaround in obtaining a refund.

“I love the fact that my job gives us the power to hold the powerful accountable,’’ he added.

Houston said there was more respect of the media and its importance in society when he started in the broadcast industry nine years ago. “However, it now feels as if that respect has gone away. I would like to see the media earn back that respect from the public, and the public continue to work [with the media to better serve them].”

Future goals? Houston said he would love to be on “Good Morning America,” but wherever he lands, he plans to be the best he can be.

Houston, who is single, previously worked at WALB in Albany, Georgia, WRDW in Augusta, Georgia, and WAPT in Jackson, Mississippi. He is a graduate of the University of Central Arkansas.