The Ohio Kings announced a sponsorship agreement with SuperSeeds, a non-profit organization with a mission to disrupt the school-to-prison pipeline by providing alternative resources for school discipline with a focus on youth development and to bridge the relationship between youth and law enforcement.

SuperSeeds is the uniform sponsor for the Ohio Kings during the 2019-20 season, and the nonprofit’s logo appears prominently on the front of the team’s home and away jerseys.

“I saw this as a great opportunity for collaboration,” said Candice Tolbert, executive director of SuperSeeds at 7812 Hamilton Avenue. “The Ohio Kings’ owners stated their desire to give back to the community. They desire to interact with young people, and to not just be examples from a distance, but mentors up close and personal.’’

“We are grateful to Candice for sharing and believing in the vision we have cast for this team. While we intend to bring a competitive, family-friendly and affordable brand of basketball to Cincinnati, it’s about more than entertainment and making money,” Aldridge said. “We want to have a positive impact on the people and youth of this city whether they ever attend one of our basketball games or not. This partnership with SuperSeeds will enable us to do that in a multitude of ways.”

SuperSeeds is an effective program that is proactive in detouring youth from behaviors that feed into incarceration. The non-profit has an established collaboration with the Hamilton 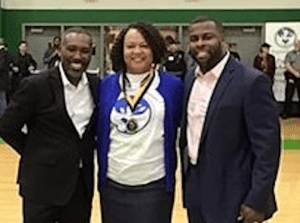 Candice and Daryl Tolbert of SuperSeeds, at right, are working with Kevin L. Aldridge and the Ohio Kings to mentor troubled youth. Photo provided

“I thought about the youth that I serve when deciding to sponsor the Ohio Kings,” Tolbert said. “They have the seeds of leadership within them, but most just ‘need to see it to believe it.’ But when they see people who look like them doing big things, it can help motivate them to get up to do something and aspire to be something.”

The Ohio Kings and SuperSeeds missions are aligned in that both organizations understand that in order to change the future, we all must reach back to help our youth before they enter the pipeline to prison, said Tolbert.

“Millions of dollars are spent with programs for inmates inside the jail to reduce the recidivism rate and programs for life after incarceration. As a community, we are doing it backwards,” Tolbert said. “We need to invest in our kids on the front end – being proactive versus reactive.”

Among the Ohio Kings community outreach efforts during the 2019-20 season is free haircuts for youth before and during games. The team is also working on an initiative with the Cincinnati Police Department to build more trusting relationships between police and youth throughout the city.