Jan-Michele Lemon Kearney, publisher of The Cincinnati Herald, was named as the replacement on Cincinnati City Council for Democrat Tamaya Dennard, who resigned from her council seat on March 2. Kearney will serve the remainder of Dennard’s term, which runs until Dec. 31, 2021. She says that she plans to run for re-election.

The appointment brings the city’s governing body up to its full complement of nine members, including the swearing in of Betsy Sundermann, a Hamilton County Probate Court magistrate who replaced fellow Republican Amy Murray. Murray left Cincinnati for a position in the U.S. Defense Department.

Councilmember P.G. Sittenfeld, who was directed by Dennard to fill her seat if she ever resigned, announced at a news conference at the Hirsch Recreation Complex in Avondale that Kearney was his pick to replace her.

Sittenfeld said in selecting Kearney he sought an experienced individual who would help the city move forward. “She is simply a lovely person,” he said. “I believe that Jan-Michele isn’t just going to thrive in this role, she’s also going to make the rest of us better.”

He added he has known her for a number of years “as a person who displays fundamental kindness and compassion and decency.’’

Kearney is the daughter of the late Luther J. Lemon who practiced family medicine for more than 50 years, and the late Elizabeth M. Lemon, who retired as a teacher from the Cincinnati Public Schools. Her mother-in-law, Rose P. Kearney, is a retired public school teacher, as well. Kearney’s sister, Norma Celeste Lemon, M.D., passed when she was in her 20s. The Kearneys have two children, Celeste and Asher. 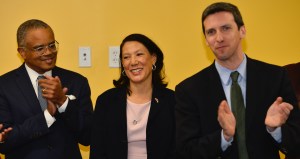 Kearney is applauded after it was announced she is the next Cincinnati City Council member. At left is her husband, former State Senator Eric H. Kearney, now president of the African American Chamber, at left, and Councilman P.G. Sittenfield, who appointed Kearney to the Council. Photo by Michael Mitchell

“She chose to come home to do good in the community in the practice of law; as a volunteer for so many causes; and, of course, with this city’s award-winning Black newspaper. That boomerang arc particularly resonates with me,” Sittenfeld said.

“I learned the values that I have from being raised in Avondale, from my parents, teachers, and church,” Kearney said at the announcement. “The three values that are most important to me are hard work, service and tenacity.” She mentioned that tenacity, as well as love and support of family and friends, helped her through treatment for breast cancer about 8 years ago.

After reciting a few lines from a favorite Langston Hughes poem, “Mother to Son,” she added that her parents advised her that life can be rough but you have to “keep going; keep climbing” when you are going through rough times, and serve others along the way.

Kearney said she looks forward to meeting and listening to as many of Cincinnati’s 302,000 residents as possible.

A few days later, Kearney said that Cincinnati needs to have a moratorium on evictions – both residential and commercial – so that individuals and families will not be displaced. She also says that provisions will need to be made to assist the owners of these properties who need the rental income to pay the mortgage and feed their families.

At the appointment event, Kearney said, “Small businesses are the fastest growing job creators, and we need to support them to help them survive and thrive.” Kearney also said that she is encouraged by labor leaders who say that plans are underway to expand apprenticeship programs to include more people of color and women, to create more job opportunity.

Sittenfeld asked the community to “come together to lift up, embrace and support (Kearney).’’