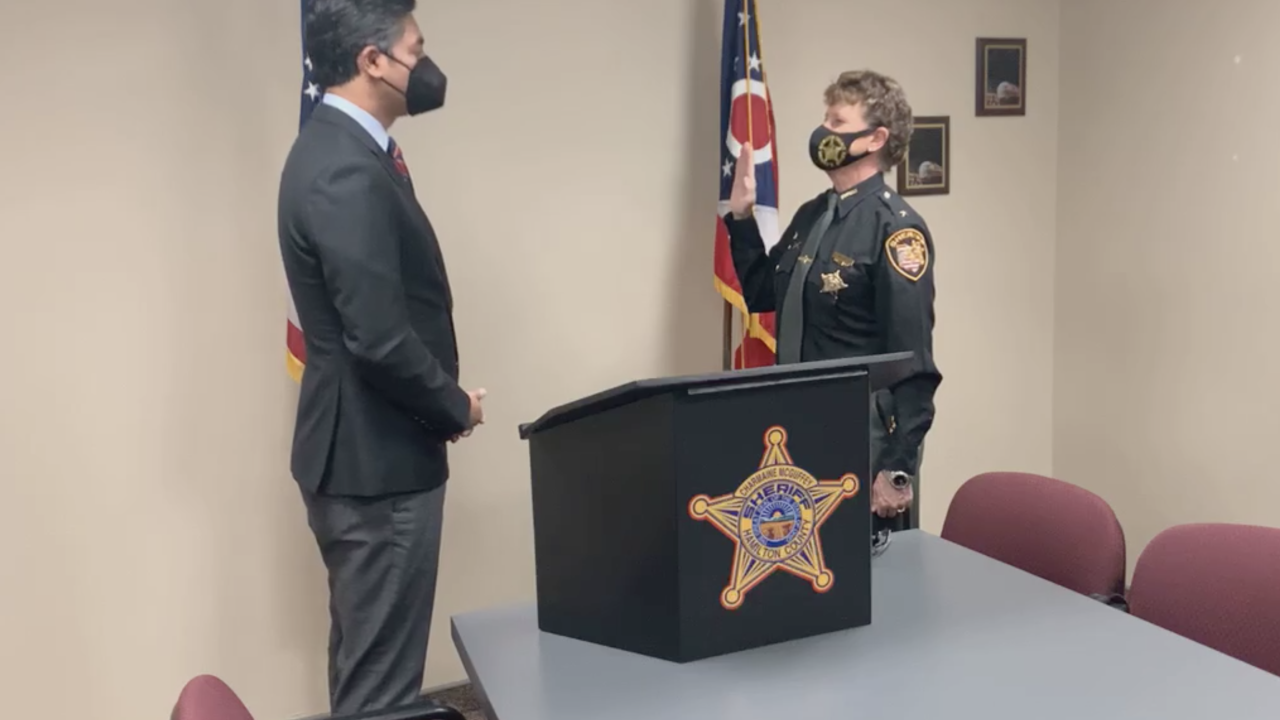 CINCINNATI — Charmaine McGuffey, the first woman and openly gay sheriff in Hamilton County, said fairness, justice for all and reform for the criminal justice system are her priorities.

McGuffey addressed the public after she was sworn in Monday morning, saying it was a “climb” to get to the position.

McGuffey was elected to replace former sheriff Jim Neil in November, when she garnered 52% of the vote to Republican Bruce Hoffbauer’s 48%.

McGuffey said she will focus on making the Hamilton County Sheriff’s Office a model for the state. She will oversee 900 staff members at the sheriff’s office.

In a press conference after her swearing-in ceremony, McGuffey said her goal in her first 90 days is to build trust and listen to community ideas and concerns.

McGuffey said her 90-day plan will consist of the following initiatives:

McGuffey emphasized one of her primary goals is to create a culture of deescalation within the sheriff’s office.

“I believe in deescalation,” McGuffey said. “I think it is the way that we work safely, that we keep ourselves safe as officers, when we focus on deescalating before we move to other measures to enforce the law and enforce rules.”

McGuffey also spelled out the office’s role as it relates to people who are undocumented immigrants. She said she wants people to be comfortable interacting with law enforcement, regardless of their status.

“The sheriff’s office should not be doing the job of the federal government,” McGuffey said. “Using local taxpayer dollars to enforce federal immigration laws is not my goal.”

McGuffey said she will uphold state and federal laws, which require a warrant signed by a judge to arrest and take custody of any person.

“Therefore, I want to make it very clear that the sheriff’s office will not cooperate with ICE (Immigration and Customs Enforcement) to accept detainer requests that are not signed by a judge,” McGuffey said.

Additionally, McGuffey said the sheriff’s office will not notify ICE when someone who is undocumented is scheduled to be released from the jail by a judge’s order.

“I’ll treat every warrant of arrest, whether it’s from other jurisdictions in Ohio, or other states, and ICE, using those same constitutional requirements,” McGuffey said.