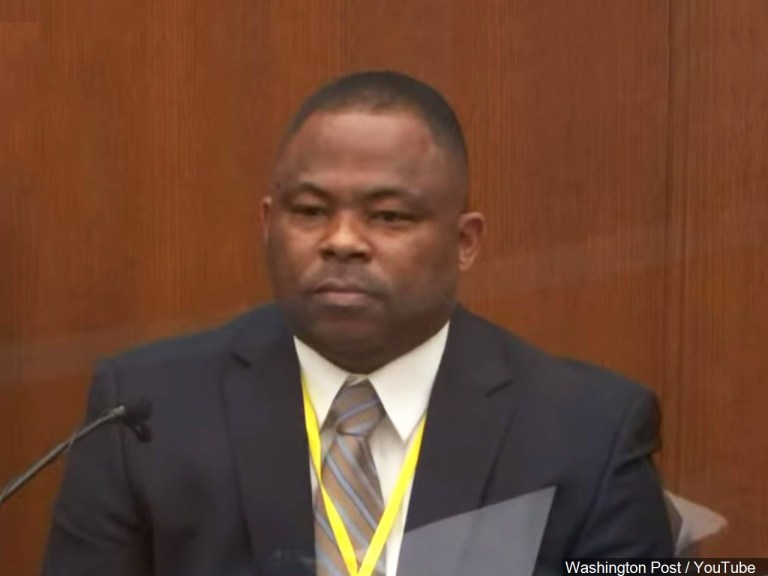 Los Angeles Police Sergeant Jody Stiger, a use-of-force expert, at the trial of Derek Chauvin, who was charged with killing George Floyd.

Day seven of the Derek Chauvin murder trial had an odd beginning, as Adrienne Cousins, the lawyer for George Floyd’s friend Morries Hall was in court representing her client. She told the judge that she does not intend to let her client testify if it means he may incriminate himself.  Hall was in the car with Floyd the day of his fatal arrest on May 25, 2020.

Excited delirium, the controversial and often refuted medical condition made its way into the courtroom as well,. The day ended with a use of force expert Sgt. Jody Stiger from the Los Angeles police department. It was a bit of strange irony since 30 years ago, the department was on trial for use of force against Rodney King.

Higher-ups from the Minneapolis Police Department took the stand as the distancing of Minneapolis police from Chauvin continued.

Sgt. Ker Yan, Minneapolis, police crisis intervention training coordinator, took the stand and reaffirmed the prosecution’s line of reasoning that Chauvin was trained properly but broke protocol in the fatal arrest of Floyd.

Defense attorney Eric Nelson in cross-examination continued to push the idea that the bystanders on the scene kept his client from protecting Floyd, though at no time does the body camera footage appear to show Chauvin showing concern about Floyd’s health or condition while lying prone on the ground.

Nelson asked Yang if an officer is trained to view the totality of the circumstances. He asked if officers have to consider how to handle bystanders, and other interactions with the suspect while being aware that medical help is on the way. And he asked if creating time and distance is an important part of de-escalation. Yang answered them all in the affirmative.

Schleicher asked Lt. Johnny Mercil, the MPD use of force trainer who trained Chauvin, if during officer restraint of a suspect and use of force, does the restraint have to be reasonable?  And Mercil answered yes.

To read more, go to: https://spokesman-recorder.com/2021/04/06/day-7-of-chauvin-trial-police-testimony-continues/

Reposted with permission from Minnesota Spokesman-Recorder.