All posts tagged in: lesley jones 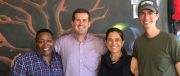 Fair Cincy PAC committee members working on a Cincinnnati Charter amendment that would change the way Cincinnatians elect council members are, from left, ..

Should the Black community be concerned with the upcoming elections?

By The Honorable Dwight Tillery Former Cincinnati Mayor Last week, the Westside Power Pack issued its ticket for the next election with Cranley at the top of the ticket. ..

Continue reading
3 years ago
1736
Comments Off on Should the Black community be concerned with the upcoming elections?
0 0

Cincinnati voters will select from 23 candidates for their new City Council in the November election. Three seats will be open, including those of Republican ..